In this stage you will:

Reflect on how play can make you experience much more than just “fun”.

Become aware of how your design can be exclusive, and on how to best avoid this.

Start thinking of the audience you want to create your game/playful experience for.

Welcome to stage one of the GameChangers Open Course, which is also, admittedly, the most difficult in the whole process, and the one that will touch on the most sensitive issues. Yes, in a few stages you might be fiddling with some nifty tech of your preference, going crazy about the correct fine-tuning of your board game mechanics, looking for the best public domain art for your cards, or for the best space for your public playful performance, and that can be quite a headache too.

However, people are and always will be the most complex part of any process, the hardest to contend with. And this stage is going to be focused on them, and on how to make them meaningfully and respectfully involved. In a word, stage one is about empathy.

However, to speak of empathy is often itself problematic, and in many ways, empathy is a weasel word, something that we always say we “do”, only not really. Example: a good product designer should understand their customers’ feelings and needs, yes, but is that actually empathy? And what are they willing to get more customers? How are they going to use their “empathic” heightened understanding of their users? There are plenty of designers who went to the dark side, maybe particularly in the field of play/games. Don’t go to the Dark Side.

So, whenever you design for other people and take that first “empathise” step (and especially when you are designing for playfulness) ask yourself this: Who benefits from my empathy?

And also remember, “if you walk in someone else’s shoes, then you’ve taken their shoes” as Wendy HK Chun warned. That is to say: don’t appropriate other people’s experience, but work with them on how to present it. Again, this is hard stuff, so we’ll break it down comfortably into Missions, though the Missions themselves might be less than comfortable in this stage. Still, let’s start with another game.

First, just as last week, find some friends and a secluded room, (or, and it’s probably even more important this week, be brave and do this in a public square) and run “The Privilege Race”

(or one of its variants)

Once again, it’s apparently a very simple game, but also patently much harder than the whimsical “Balls Game” we played last week. In its more indoor-friendly version, it goes like this:

Simple, isn’t it? Now, first, ponder the very same question I posed last week: did you have fun? Was this actually “playful”? Take some time to think about it. Yes, this definitely pushes the boundaries of what is usually considered a game.

Still, we are using arbitrary, circumscribed rules to generate a novel experience, so some would argue for that. For sure it looks like a game to onlookers, but there’s something more to it: its rules reveal some of the “rules” and “games” of everyday life.

Contrary to last week’s example, there is no need at all to remix this game to make all the people of a city play it. They are already doing that. Willing or not. And they can’t stop.

A related question, however, emerges at this point:  how would you change/remix it to make it more fair?

Another big question, and definitely much bigger than last week’s at that. Think about it, discuss it with everyone you played this game with, and with any stunned onlookers. And post your thoughts at #gchangers (See, I am still going to say this a lot).

So, in Mission 1 we did realise how we can design playful/gameful experience so as to raise our awareness of how “the rules of the game” work. Maybe you were among the “winners”, maybe not, but at least, for once, some rules of the “game of life” where apparent and evident to everyone in the room. However, this still does not, in itself, actually tell us much about the actual experience of our fellow players.

Luckily, there is something play/games are particularly good at: putting us in other people’s shoes. As I write, in my life I stepped in the shoes of soldiers (which might be an exceedingly common experience nowadays), refugees (less common, but more researched), superheroes, entrepreneurs, barbarians, wizards, dolphins, mice, you name it. I’ve even stepped in the shoes of whole civilisations.

All this to say: every time we step into the shoes of these “player characters” (or PCs, if you are one of those geeks), we have the precious opportunity to experience the world from a different point of view, and therefore to reflect on our own. So let’s have a bit of fun with an “empathic” experiment. The big figure you can find below is called an Empathy Map, a common tool used (with slight variations) in design thinking processes. 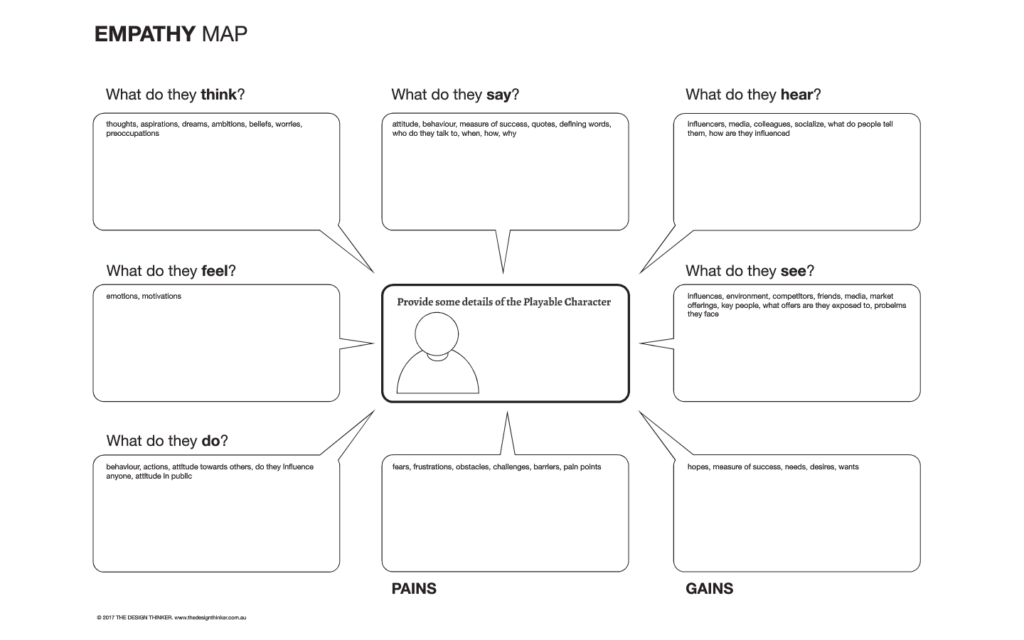 Now let’s just try and fill it in from the perspective of any of your favourite game characters. Print it out on an A3 and use differently coloured post-its to note positive and negative additions, while  keeping in mind a few questions: how does this character differ from me? How are we similar? How is their experience applicable to the real world?

Really looking forward to see your maps shared on #gchangers.

However, while this indeed might help us getting the feel of other people’s shoes, remember that throughout this course we will be creating something aimed at having some kind of consequence in the “real” world, and how I warned you about “taking other people’s shoes”, as discussed in the introduction. Indeed, while Mario might not care about you stealing his Italian shoes, real world people might not like you taking their point of view without consulting them.

So let’s do one of our usual remix exercises: what if, instead of the “usual” player character, the protagonist of the game was the friend who came last in the race? Of course some games lend themselves better to taking this exercise literally, by virtue of being more “realistic”, but there’s always something to learn from it.   And while this of course touches on issues of usability, especially when touching on themes of disability, it’s a much broader issue, as it pertains inclusion.

The fundamental questions you must work out with your friend here is: how do they feel in taking the Player Character’s place? Could they even play this new game? Would they actually be interested in doing so? How would they change the game to make it more playable and interesting? How would the “change of character” change the game itself? Once you have answered this questions, move to the next friend, in reverse race arrival order, and share your insights on #gchangers.

In Mission 2 we have explored a quick-and-dirty way of being inclusive in our design, but it is also true that we can’t design for everyone at the same time. While the objective of this course is to change the world through playfulness, we can’t do this with just one game/playful experience. We need legions, and therefore we need them to be created by everyone.

We need therefore, when creating something that can make a difference, to focus on making a difference for some specific audience (and, as shown by the exercises above, having someone from that audience on board is the best thing that can happen).

So try and think of one. One good way of doing this is in a socially progressive way is thinking of those who answered “No” to any of the questions of Mission 1. Now repeat the Empathy Map exercise for a third time from their point of view, but slightly shift the perspective: we are not talking anymore about being characters in a game/playful experience, but about being its creator. The Map would therefore now ask you to “Provide some details of the Play/Game Designer”.

Once you have done that, you should have a good idea of the kind of what kind of creator you need to be for your selected audience (and this is something which you should really share on #gchangers, both to receive further feedback, and to provide a useful tool for fellow designers). Taking the responsibility of this renewed, hopefully truly empathic perspective, here’s this Week One’s final exercise (of course to be shared on #gchangers):

And yes, the word “known” is relevant here: many people out there don’t think that they can create play/games themselves, and don’t actually have that much experience of the diversity of play (as discussed last week). So this exactly where we/you come into play, to remind them and help reflect on how they play (or played), and use those elements, that box of toys and games, in your design.

So join us in 7 days for Stage Two of the Open Course, when together we’ll create start remixing play!

Now you’re a Game Changer why not join the #GChangers community and share your adventures in playful education.
Playing is a social activity, so let’s share!