What is Your Story?
Activity Guide

What is Your Story? is a narrative car-based activity designed to encourage creative and abstract thinking.

This toolkit guides you through how to deliver ‘What Is Your Story?’: a playful card-based activity to engage learners in creative and abstract thinking. ‘What Is Your Story?’ encourages learners to use their visual literacy and oral communication skills to explore a topic in a fun, challenging, social activity.

‘What Is Your Story?’ can be used with a range of audiences, across levels and disciplines, and can be made topic specific either by structuring workshop delivery around given topics, and/or adapting the design of the cards with new images. ‘What Is Your Story?’ has three card elements: People, Context and Activity. The aim of the game is for players to create a narrative around a given topic using the People, Context and Activity cards, and to share their story with other players.

Step One: Decide if your cards are going to be learning context specific

Are you going to use your cards in a specific class or workshop? Do you want the players to create narratives around specific themes?

If yes, then you might want to consider whether the images on the cards are visual cues specific to a given theme or discipline, or whether the cards can be more generalised cues. When choosing what images you want as cues on the cards, you can make them as broad as possible, to allow the cards to be used in multiple scenarios or with any theme (see original version). Or, you can make the images relate to an area of interest or a particular learning context (design your own!).

Think of who you want to use the cards, what ideas and narratives do you want them to think about during the game, and what kinds of images might be most appropriate to the learning context. If you would like to use the original version of ‘What Is Your Story?’ you can download and print it yourself, or alternatively contact the DMLL to see if we have a printed pack available. If you would like to design your own, see Step Two and Three.

Now that you have decided what kinds of images you want to use, you can go about collecting your images to be used as visual cues for the three categories. To do this you can either make your own images or find existing images that are held in the public domain.

If you want to make your own images, you can draw images, take your own photos or use any other means, so long as the resulting images are 300 dpi and can be visually interpreted by the learners/audience you have in mind.

This step is time intensive. It can take a surprisingly long time to collect enough good quality images to make a deck of cards. Make sure you give yourself enough time to find and curate the images you want to use for each story element: People, Activity and Context.

Step three: Designing your own cards!

To help with this stage, this toolkit includes design templates to design you cards. Before you get started consider:

How and where are you printing your cards?

Through following the design section of this toolkit you will now have your own ‘What Is Your Story?’ cards. These can be used as a short icebreaker activity or a longer classroom learning session, all depending on how you plan to structure rounds of play. 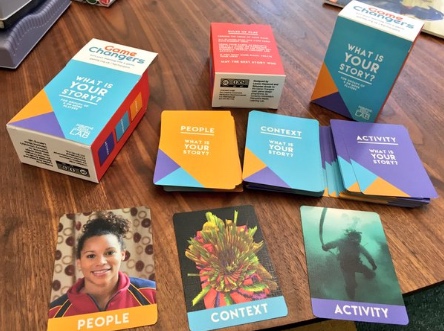 Players sit around a table. Set the three card elements into decks in the middle of the table. Three rounds per game. Set a theme for all rounds in a game, or decide different topics for each round.

At the beginning of each round, players select one card from each element deck: People, Context and Activity.

All players have 2 minutes to look at their cards and to think of a fictional narrative that links the three story elements to the theme of the round.

When the 2 minutes are up, each player in turn tells their story, revealing their story elements to the rest of the players while telling their tale. When all players have told their story, players choose which player they think had the best story*.

Repeat for each round. The player who had the best stories wins.

1. Players pass their cards to their chosen player. These cards are discarded and out of play, but are stacked in front of the player to indicate how many rounds they have won. The player with the highest stack at the end of the game wins.

If you would like to use the cards for an icebreaker activity, without a discipline specific learning objective, perhaps offer fun suggestions of topics or get the group/s to choose their own theme to the play.

As the activity is participatory it should be easy to qualitatively measure whether the playful learning session has gone well or not. Consider the level of participatory engagement. Ask learners for verbal feedback and reflection on how they feel the session went.

The game plan can lead to a strategy, a service and/or a product! As the process is based on the Design Thinking process, it will be iterative, agile, and incremental in order to refine a gameplan. The process will exploit playfulness and engagement to help encourage creativity and innovation.

As the activity is participatory it should be easy to qualitatively measure whether the playful
learning session has gone well or not. Consider the level of participatory engagement. Ask learners for verbal feedback and reflection on how they feel the session went.

We’ve built an online version of our What is Your Story? card deck for you to use in your activities. Simply visit wiys.gchangers.org to begin.

Looking to snap up some physical cards to use in your own activities? Pop us an email and let’s see what we can do!

Want to print decks yourself or create your own unique learning design? Well, we’ve got your back with CC licenced design files!